How Will DevOps Training Impact My Organization? 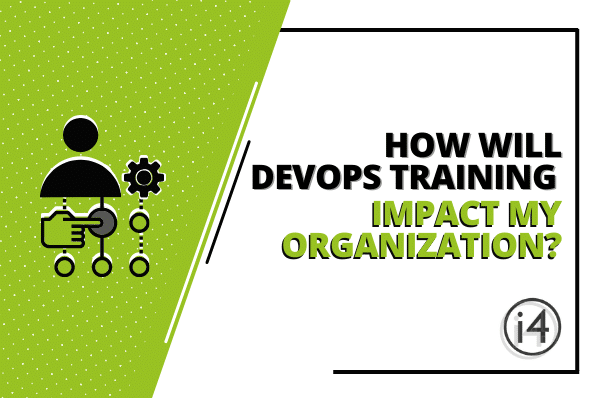 The main idea behind DevOps is to bring together development and operations teams in order to create a better product faster. And with more than 80% of organizations adopting some form of DevOps, it’s clear that it has had a significant impact on how a business operates as well as providing increased agility and scalability.

This blog post will help you learn more about the impacts DevOps training might have on your business and organizational culture.

First and foremost, extensive research has confirmed that 99% of organizations that have implemented some form of the DevOps concept have seen an improvement in their ability to release products.

Further statistics show that DevOps helped 61% of organizations in producing more high-quality deliverables, and 49% of businesses state that thanks to DevOps methodology, their time to market has accelerated, and their deployment frequency has improved.

These percentages prove that the implementation of DevOps has had a positive effect on companies. Keep in mind that the majority of those on board the DevOps train have been practicing it for less than three years. This only shows that the benefits of DevOps are likely to increase as more and more companies implement it.

But with any change, there is always a certain level of risk. It’s important to weigh the pros and cons before deciding if this is something your company should do.

Here are some of the key benefits you can expect from learning about DevOps.

If your development and operations departments are separated into silos, it can be difficult to get anything done quickly. In fact, in one business, there can often be unnecessary tension between those who build customer solutions and those who maintain and support them.

DevOps helps break down these barriers and encourages a collaborative environment where both teams work towards the same goal.

This type of communication is essential for producing high-quality products that meet customer demands. It also ensures that everyone is on the same page, preventing costly misunderstandings further down the line.

In addition, DevOps creates a culture of ownership and responsibility. Developers are more likely to take ownership of their code and be proactive in finding solutions when there is an issue. And ops will better understand the development process, which can help them troubleshoot problems faster.

According to the SAFe DevOps principles, DevOps represents a shift in how a company builds it’s solutions.

In a conventional Agile environment, you will have a development team that needs to deliver changes quickly to meet customer demands. On the other side of the equation, you have an operations team responsible for deploying and supporting these changes in a live environment. The goal of the operations team is to regulate the number of changes so that the system can handle them without breaking them.

DevOps is a new way of building and delivering solutions that remove the need for a separate operations team. With DevOps teams and the Continuous Deployment principle, changes are made quickly and efficiently without putting the system at risk.

As a result, businesses can deploy changes more frequently, which gives them a competitive edge in their market. (But out-deploying your competitors is not the final goal here, as we’ll get to in the next section).

The main goal of any Agile company, especially one that employs DevOps, is to deliver value to the customer.

How do you know what value is in your business? How can you find out what your customers consider valuable?

The answer to this lies in one of the core principles of DevOps: Continuous Learning and Continuous Improvement.

To continuously deliver value, you need to constantly learn about what your customer wants and needs. You also need to be open to feedback and willing to change how you do things based on that feedback.

This is where DevOps training comes in. By teaching employees how to embrace change and learn from their mistakes, DevOps helps to create a culture of quality.

When everyone in the organization is constantly learning and improving, the products they produce are bound to be of higher quality.

As we mentioned above, out-deploying your competitors is not the end game. Out-learning them is.

Another crucial benefit of implementing DevOps is increased agility and scalability.

In the last couple of years, we have witnessed how vital it is for businesses of all kinds and sizes to react quickly to changes in the market (and the world in general). The COVID-19 pandemic has shown us how things can change in a blink of an eye and how unprepared companies can be when they do.

The benefits of a DevOps transformation we’ve described, such as increased deployment frequency, improved product quality, and a culture of collaboration and learning, are all essential for creating a more agile and scalable organization.

But there’s one additional benefit that is often overlooked: employee morale.

Employees who feel appreciated and valued are more likely to be productive and happy in their work. And when employees are productive and comfortable, the company can scale up faster and more easily.

To better understand the impact of DevOps training and certification on an organization, let’s look at some success stories.

Etsy is a perfect example of a company that has benefited from implementing DevOps.

Back in the early 2000s, Etsy was struggling to keep up with the demands of its customers. They were deploying changes only twice a week, which was too infrequent for their ambitions. Their teams were sequestered into silos, and there was a lot of animosity between the developers and operations teams.

To address these issues, they turned to DevOps, more specifically the Continuous Deployment pipeline. Once they allowed their developers to deploy their own code in 2009, they increased their deployment frequency to multiple times a day (over 60 times!).

This change improved the customer experience and also had a positive effect on employee morale.

The new working model allowed employees to take ownership of their work and see the direct impact they had on the business.

Since then, Etsy has maintained its position as a leading e-commerce company due to its continued use of DevOps practices.

Another notable success story is Netflix.

Netflix faced some serious scalability issues back in the early days of streaming video. To solve this problem, they turned to DevOps and the cloud.

They created a new, custom-built, web-based platform that easily added capacity as needed. Their developers got the all-clear to build code snippets and deploy them without waiting for permission from IT operations. And thanks to automation and automated monitoring, they could quickly fix any issues that arose or, if need be, revert to a previous version.

Today, Netflix is one of the largest streaming video providers globally, and they owe much of their success to their DevOps practices. At an awards ceremony in 2015, Netflix was commended on the speed with which it adopted new technologies and incorporated them into its DevOps culture.

If we step away from technology and processes, we also have to take into account that DevOps is as much about the people and the culture as it is about the tools.

Take Target, for example. DevOps first began as a movement only on certain teams within the company. However, when those teams displayed increased agility, faster time to market, and higher customer satisfaction rates, the company-wide adoption of DevOps began.

Target is now considered a “DevOps-driven” organization, and they continue to reap the benefits of this approach. They now organize a six-week event called the “Dojo,” where employees from all different parts of the company come together to learn about and implement Agile and DevOps practices.

When implemented correctly, a DevOps approach can have a transformative effect on an organization – making it more agile, scalable, and productive. And as we’ve seen, this can lead to a better customer experience and happier employees. Most organizations are now realizing the benefits of DevOps and are turning to training to help them make the transition.

That is not to say that adopting DevOps won’t come with its own set of challenges, especially for larger organizations. You might meet with resistance from the leadership and/or from certain teams within the company, and it could be difficult to start changing processes that are already in place.

But with the right training, DevOps toolsets, and support, any organization can transition to DevOps and reap its many benefits.

If you’re looking to implement DevOps in your organization, be sure to check out our upcoming DevOps training courses. They will give you the skills and knowledge you need to start this transformative journey.